Tony Davis has an article in the morning daily congratulating Tucsonans for their thrifty water use habits.  In the article, he does a nice job of pointing out the obvious connection between conservation and giving consumers information about their water use - unmetered uses will almost always be higher than metered uses (assuming there are volumetric charges for the water).  But there is always bad news that must accompany good news (wouldn't want folks getting too cocky).  In this case, reduction in water use is rewarded by increases in water rates because of the way rates are structured in Tucson.  Here's how it works:
Here's what Tucson's rate structure looks like on a graph, comparing it to other 4 block rate structures: 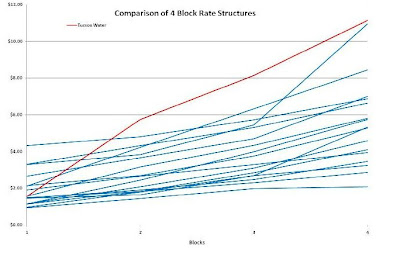 How do you fix this?  You restructure your revenue model so that more of your fixed costs are covered by fixed revenues (monthly service charges paid by all customers or increase the rate in the first block).

Here's how Tucson's monthly service charge compares to those from several other cities: 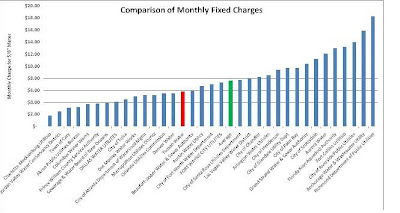 This is what Tucson Water is trying to do this year, but they are certain to get pushback from the city council because of the potential impact on low-income customers.  So we'll be revisiting this issue again next year, and probably the year after that.
Posted by Chris Brooks at 11:01 AM