My last post included a feeble attempt at showing that there is some correlation between price and water usage.  The connection, I believe, still stands but a helpful reader made a suggestion that greatly improves the interpretation of the data.  So I switched the x and y axes and tried some other types of regression and came up with a pretty good fit using a power function.  Here's the new graph: 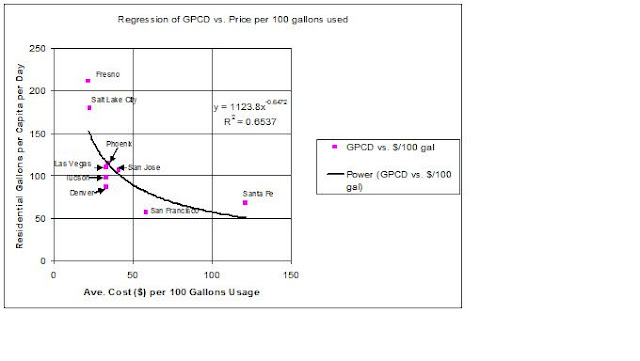 I'll spare myself the embarrassment of trying to explain power functions, but the equation listed on the graph (above the R-squared value) describes the curve and indicates a non-linear relationship between price and consumption.  As might be expected, demand drops off rapidly when price increases initially, indicating greater sensitivity to price at the high end of water usage, then drops off more slowly when you get down towards 50 gpcd, which would mostly be indoor water use (less discretionary).  That seems to make sense to me.
Also, the most recent update from Circle of Blue includes the data shown on the map in their previous update in table form.  And provides sources for the data as well!  Ask and ye shall receive.  The article also discusses the alarming phenomena of falling demand and rising prices that seems prevalent among water utilities recently.  This is an unintended consequence of some of the more progressive rate-setting policies (like increasing block rates) and has been occurring for several years here in Tucson.  It could be largely avoided, most easily by returning to single or seasonal rates for water but that would have other, unwanted consequences.  So until the standard formulas for cost recovery in water rates are changed it will continue to be a fact of life in many cities.
Posted by Chris Brooks at 9:26 PM

I just noticed an issue with the graph. It should say $/100 gals per person per day, not $/100 gals used. Just thought I should clear that up.