How strong is the connection between price and water use?

I get a weekly email with updates from the website Circle of Blue, that occasionally contains gems like this one that showed up recently. What I've really been impressed with on their site are some of the nifty things they do by combining data with mapping functions.*  So if you scroll down on the Circle of Blue page linked above you will see a Google map that has a bunch of data call out points on it. Click on any of those points and it will show you data on per capita residential water use and average costs for water in each of the cities shown.**

By way of background, I received an email from John Fleck last year where he asked if I knew of a source listing per capita water use that compared "apples to apples" - i.e. comparing only residential water use, not just taking some random total water use number and dividing it by population. This can be surprisingly hard to find.

So as I was looking at the water use data I got the idea that it might be interesting to try plotting the gpcd numbers against the average price numbers just to see how well they correlate. And this is what I came up with: 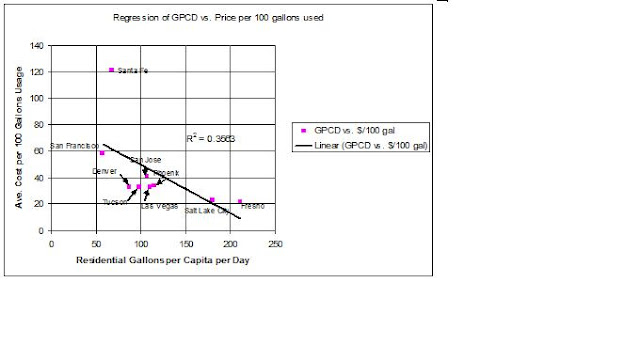 If I remember my statistics, 0.3563 indicates pretty strong correlation, but obviously there are other factors present besides price.  You might notice that I pretty much cherry-picked the data I presented as well.  I tried to include data from Western cities that might have similar water use patterns so that price would be main variable being tested here.  Is the result fairly obvious - sure.  But that's often the point of statistics - to test something that appears obvious and try to figure out if it really is.

Oh, and there was one other nice bit of data in the call outs attached to the map - it says what type of rate structure each city uses.  I hope the Circle of Blue folks keep up the good work.

* My only quibble with data presented in this way is that they don't indicate a source for their numbers.  There's an email address for the person who put the graphic together, so I might have to email him and find out where he got all his data from and verify that it really is "apples to apples".

** The data for Fresno is pretty shocking, but when you consider that they charge a flat rate for water and I believe still don't meter most of their connections it seems pretty self-evident.  Also I was disappointed that there was no gpcd data for San Diego and Los Angeles - they're probably pretty tired of taking their lumps for residential water use.
Posted by Chris Brooks at 9:20 AM

0.3 kinda stinks, but you have the germ of a good idea.

What you're graphing is the demand curve, but you might want to reverse the axes so that the dependent variable (usage) is on the vertical axis. I'm not an economist, but this makes sense to me.

On the whole, I wouldn't expect the demand curve to be linear. I think that a more physical demand curve (with the horizontal axis as $) would have an inverse 'S' shape: flattish and high use at low cost then decreasing as costs go up, and then flattening again at high price where people have squeezed their usage to the minimum. Maybe 50 gal/day/person is a reasonable number for this based on what I remember of Australian use statistics.

Thanks for the comment Brent. Like I said, I kinda remember my statistics - but as I recall I didn't do real well in that class when I took it 20-some years ago. I'm going to post an update with a new graph that shows better correlation using a power function. There was also a new post on Circle of Blue that presents the data in table format - with data sources.

They 'cherry picked' the data represented to make a point???

What's this world coming to?